Schohaus is truly the “Home of the Beautiful Doberman” – home for a Doberman that has a beautiful mind, body, and spirit.

It was August of 1980 and John and Lori had just got married. John had never had a dog and Lori had always had one, and at her insistence, they acquired a Springer Spaniel. But John really wanted a Doberman Pinscher. Well that Fall Lori was taking a class with a gentleman that had an all red litter sired by CH Hardobes Red Badge of Courage. So that December their Christmas present to each other was a red Doberman dog, and their love affair with the Doberman Pinscher began. Then two years later they got a black bitch by the same sire. They bred their first litter and the kennel name Schohaus was born. 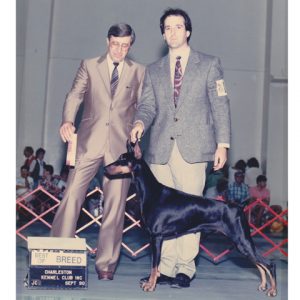 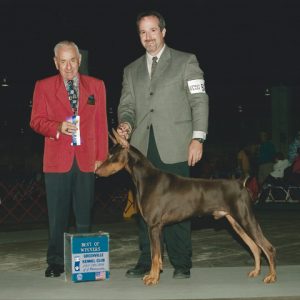 John attended some DPCA nationals and did some showing in the early 80s, learning all he could. Meanwhile the family grew as John and Lori welcomed a daughter, Aislinn in 1983 and a son, John in 1986. But it wasn’t until 1989 when John talked with Linda Krukar, that they got Fashion, who went on to become their first champion-CH Dabney’s Fashionably First, that John really began to show. Fashion produced the first Schohaus Champion, CH Schohaus Triumphant Tudor. Both of these wonderful Dobermans were constant companions to their two children.

John started his own business at this time, and backed off from the shows for a short time, but there was always a Doberman in the house, usually two. Meanwhile, John and Lori continued to attend every National from 1993, where they became active members in the Top Twenty Committee. John also became a Working Aptitude test evaluator, and served on the DPCA Board. There have always been numerous other activities with the Nationals they have helped with. 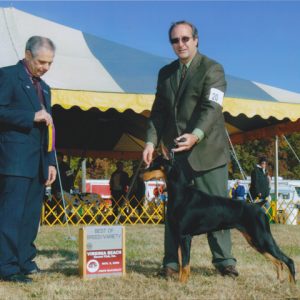 When it was time to get involved with showing again, they got a red dog they had co-bred with Sharon Pflueger, that went on to become CH Goldgrove Winter Storm v Schohaus. John then came into his own as an Owner/Handler. As the only handler, John finished Ch. Schohaus Lord of the Storm, Ch. Schohaus Archangel Uriel v Azar (Winners Bitch at the 2005 DPCA Pre-national Regional in Texas), Ch. Kaliber’s Alysheba (from breeder Nancy Raffa-Sodel) and GCH. Schohaus MacArthur’s Mein. 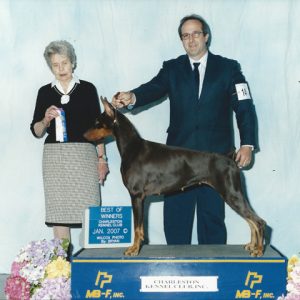 As John did the show thing, Lori did the care thing. Suddenly their children were grown, and they only had Ch Kaliber’s Alysheba living with them. So they got their empty nest baby girl, Envy in 2008, co-owned with breeder, Carmen Pitts. BIS BISS GCH Allure Envy Me Royalwood v Schohaus, shown exclusively by John, was in the Top Twenty for 3 years before being retired. She has thus far produced CH Schohaus Winter Vanguard, GCH Schohaus Key to Credence, CH Schohaus Key to Dominian V Thunderhaus WAC CGC, CH Schohaus Key to Audacity, and GCh. Schohaus Loyal Autumn Knight (Reserve Winners Dog at the 2015 DPCA National).

John and Lori have always felt that temperament, as well as conformation is very important in the breed. Keeping in mind the intelligence of Dobermans, they have continued to breed true companions that are loyal and loving as well as protective and alert. A good home for these companions has always been paramount for them and today there are many that have continued to own or co-own Schohaus Dobermans. They have also made many longtime friends in the Doberman Community. Their support and shared love of Dobermans, have been invaluable to Schohaus during the years.
Today Schohaus is truly the “Home of the Beautiful Doberman”-home for a Doberman that has a beautiful mind, body and spirit. 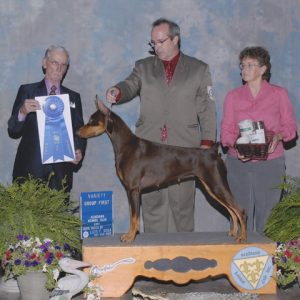 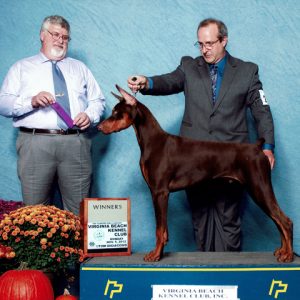 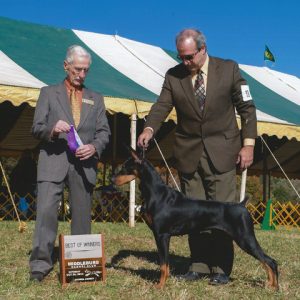